The following text is taken from a review posted during November 2010 on a previous site. It was part of a collection of reviews that assisted me in contextualising my art practice within the parameters of (visual) anthropology. Presented in its originally form, I have edited the text to reflect the correct tense; the content remains ostensibly unaltered. 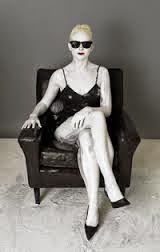 Upon visiting Jerwood Encounters This Must be The Place, a member of staff suggested that I also visit new work exhibited at Poppy Sebire Gallery located on Copperfield Street SE1. Ms Sebire (and her terrier, Louis) welcomed me into the gallery that both intimate and airy, allowing adequate space to reflect upon the work. The exhibition, entitled New Chapter, was sensitively curated with themes of natural history, masks and abstract hand coloured etchings positioned harmoniously next to one another.

Boo Ritson is a sculptor/painter/photographer who works within multi-media, producing work that links the three disciplines. Previous work by Ritson exists as a media hybrid of painting, photography and elements of performance art. Models are clothed according to specific occupations and/or stereo (type). The artist paints directly onto models in a manner that is reminiscent of portraits by Glenn Brown and then she photographs them as living sculptural forms. By concealing the eyes with reflective sunshades, the effect is heightened. The obscuring effect of the eyewear creates a jarring sensation in the viewer (a sensation attenuated in the images where the model doesn’t wear the shades. It is as though the illusion is contingent upon the anonymous persona of the living mannequin). After four years of developing her practice, Ritson’s work appears to have evolved further towards statuary constituents in her imagery. The most prominent work displayed was a painted costume placed beside a large format photograph of a model wearing the same. One is conscious of an allusion towards fetish outfits (the livery, at first glance, appeared to be a rubber nurses uniform), but also an idea of theatrical costume. Somewhat unnerved, I felt that there was a blurring between the consolidated images. 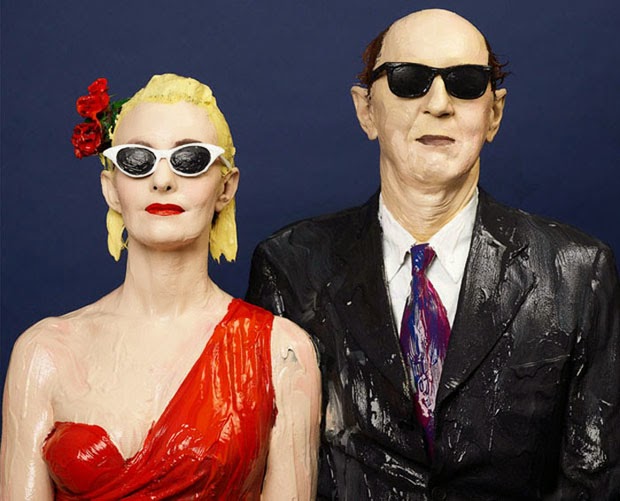 Dolph van Eden
Dolph van Eden graduated from UAL in 2014. His areas of interest are Visual Anthropology and the history of Central Asia. As an artist investigating the medium of drawing, he has worked as a teacher and consultant. His art practice encompasses illustration, photography and film installation.